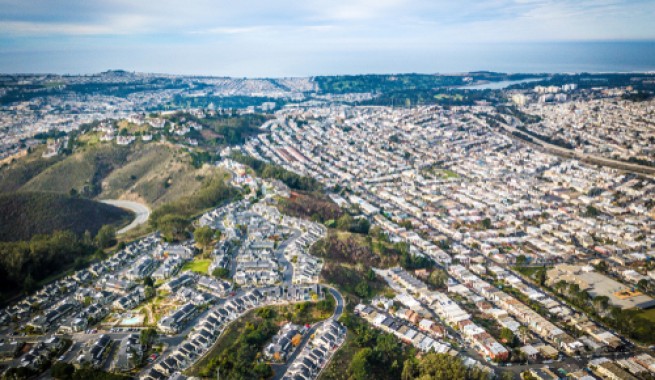 Our boutique hotel has an official address in Daly City, but we’re really part of the neighborhood of Bayshore Heights—where parks and views abound.

The Bayshore Heights community dates back to 1929 in terms of official development. It’s a walkable area, with good access to public transit and populated mostly by single-family homes.

Tucked between San Bruno Mountain and the Bay, the neighborhood is not far from the 101 on the San Francisco peninsula, providing easy access to Downtown San Francisco, SFO, as well as the Pacific Ocean side of the peninsula.

We have the luck of being surrounded by large parks. John McLaren Park sits to the northwest—the third largest park in San Francisco, with trails, playgrounds, and an amphitheater. Bayview Park can be found to the northeast—named for its bay views, naturally. Finally, the impressive San Bruno Mountain State Park to the southwest—also known for elevated views, with hiking trails and picnic areas. Less than half a mile walking from Mylo Hotel, there’s also Kelloch & Velasco Mini Park, which has a playground and basketball courts.

A little bit of background info helps to get a sense of the area’s best viewpoints, so you can plan to take some scenic snapshots on future visits.